We are going share some of the most important information about stellar wallets. We have seen report regarding to stolen stellar from Blackwallet hack. This article will direct the coin holders various wallet options where they can store their Stellar Lumens, which Stellar Wallet is considered to be trustworthy. You will get all the answers here at one place.

New Year has arrived and 3 weeks have passed. With this we can see a constant downfall in almost all the cryptocurrencies in the world. We can see Bitcoin, Ripple, Ethereum, Cardano, Litecoin, Stellar Lumens and various others getting low on the graph. Hence, from the view point of an investor, we can advise all the ones who had thought to invest in cryptos have the best change to enter into the market. Giving a piece of advice, we think that those who have purchased the cryptos must hold on and don’t panic.

The market is down due to many reasons but soon will survive and start growing like before. So we suggest that in this recession period it is right time to invest money by purchasing the right coin. According to our last Stellar Price Prediction, our financial advisors had advised that the coin has a very bright future. With the companies using or partnered with Stellar Lumens such as Telindus, IBM, Wipro, Hashcash Consultants, MONI, Deloitte, LeEco and many others.

Hence we can say that if these many companies have joined hands with the Stellar Lumens network that it simply means that this coin has a future and the technology is going to be the next stop for all the leading companies.

We have listed few XLM Wallets that are best suited to supports and store your Stellar Lumen Coins with utmost safety and privacy.

The list of various Stellar(XLM) Wallets are listed as under with brief explanation.

First in our list is Ledger’s various models. So here we will be share Ledger Nano S, one of the newest released by Ledger. This wallet is a hardware wallet that supports Stellar Lumen Coins. One of the best available wallets which has a physical existence is Ledger Nano S. it looks like a pen-drive but stores various altcoins. Here, the users can be rest assured as the wallet is one of the best of its kind. You have to create a Pin Code at the time of setup and the same helps you to restore your funds if lost. This new wallet is having 2 physical keys (buttons) which are used to confirm any payment.

If the buttons are not pressed simultaneously then the transaction will not take place, this reduces the possibility of hacking the funds from the wallet. Ledger Nano S is available in the market at around $95 USD. The OLED screened wallet is worth keeping.

Next in the list is Stronghold wallet. But Stronghold is not specifically any wallet, it is an exchange where clients can trade, buy or sell cryptocurrencies on regular basis. Stronghold is an exchange that works on the Stellars network. This exchange is offering the exchange services with lightning speed by reducing the traffic and taken time of not even 1 single minute.

It is been proved by many that Stellar Lumen’s network is very secure and so the wallet service offered by Stronghold makes the Stellar Lumens in the wallet very safe and non hackable.

Being quick in service and easy to handle, simple to trade/transaction is like by all. Lobstr Wallet offers all these to the ones who are holding Stellar Lumens. This wallet accepts and stores Stellar coins and keeps it very secure.

In just 5 steps you can open Lobstr Wallet Account and you can send and receive Stellar Coins. This wallet is a mobile app and allows the users to carry their Stellar Lumens with them and handy. The instant services makes the wallet very live and the technology used by Lobstr keeps the assets very safe and secure.

Here at the time of Login, we have to enter the Public Key which identifies the account and the same is used to receive the funds. Then the Secret Key / Private Key is used to have the access of the account and to make the trade. If the client loses the Secret key then he cannot access to the funds held by him. Hence anyone who is not having the true keys cannot manipulate the security check and steal the funds. 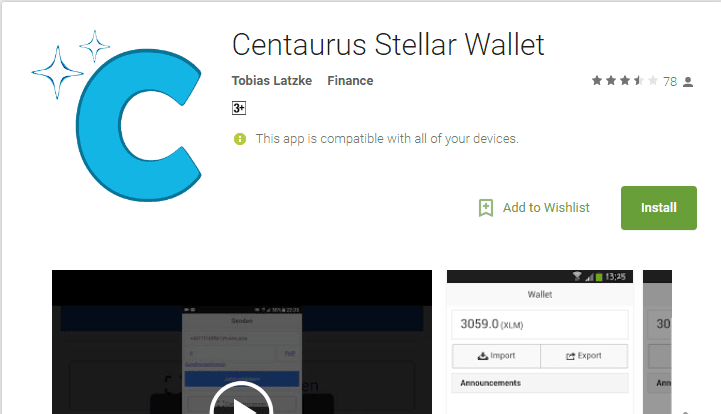 Centaurus Wallet is an Android based mobile wallet. This wallet is very similar to Lobstr wallet where the users can easily and instantly share the currency from one place to another within seconds. This wallet offers various languages and so the users can use the application in their respective language such as Japanese, Chinese, Russian and many others.

Downloading it from Play Store, it will automatically generate an account and store the secret keys in the device. Then we have to export these secret key to the secure place and can be used if the device is lost. Here, we advise the operators not to allow anyone to open this app or do not hand over your gadget to anyone without prior safety. The key features are QR code scan, display account balance, simple Stellar anchor support and many others.

These are the most popular Stellar Lumens Wallets that are used widely by most of the Stellar holders. There are many other stellar wallets such as stargazer, SAZA, LuPoEx, PAPAYA which can be used. However these wallets are verified and used by us and have satisfied us and so we are suggesting these wallets to you.