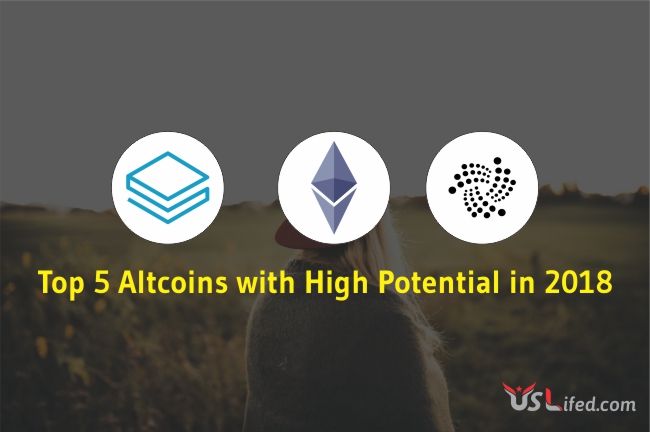 Keeping in mind the transaction speed and fees, altcoins are far better than bitcoin for many reasons. The enormous price of bitcoin also holds it’s back whereas altcoins are priced low and are better alternatives. Hence entry for the altcoins is quite difficult in compared to the Bitcoin. And some altcoins even posses more advanced technology and some of them even have a boost time of 3 seconds (eg. Steem). So, the top altcoins with high potential in 2018 that you might be interested to invest in are listed below.

There are plenty of altcoins with high potential and undoubtedly some of them are just illegal scheme to manipulate people’s money. Be wise enough to invest on which has potential not in which that looks cheap.

Disclaimer: None should consider this article as a financial or investment advice. As this is just an opinion, all should invest as much as they can afford to lose.

Steem is my all time favorite altcoin. And here are the reasons why.

It has a lightning speed of transaction (only 3 seconds) and with zero transaction fees. Even after reaching up to 1 million transactions it hasn’t slowed down, moreover using less than only 1% of bandwidth unlike Ethereum with their Cryptokitties.

Here basically we have to earn Steem and Steem dollars in the platform. Steem can be upgraded to Steem power, which basically influences how worth your vote is. For example, if someone has 10,00,000 Steem power he can probably give out vote worth more than $100 and someone with 500 Steem power can barely give 10 cents. With more content creators more investors will join in making it an influential platform.

Think of how many people post on Facebook but does they get anything out of it? NO! But Steem has rewards for such posts which makes it a highly beneficial platform.

Steemit is also working on launching Smart Media Token next year, besides that. This means anyone had the freedom to create tokens and do crowdfunding or raise funds in some way or the other. It will also help in monetizing websites making it useful to the various business ventures. Ethereum blockchains charge people over $600 per piece who want to create their own tokens which is extremely costly. Whereas ethereum charges only $2.50 for creating tokens moreover it has a transaction speed of 3 seconds. Steem really has some great potential and one of the best-ameliorated altcoin.

Ark states themselves as a brand which particularly focuses on consumer adoption. They have attempted to bring the SmartBridge technology to life, which makes them unique. It’s basically a technology that links blockchains together. For example, Ethereum with Steem, Steem with Bitshares and so on.

It has a decent transaction speed (around 8 seconds) and staking is also allowed. Staking basically means that we can generate more coins than we have. Like other cryptos, Ark is also decentralized and the voting weigh of Ark is divided across all votes. For additional protection, it also has an ArkSheild program added to it.

With their own promised ecosystem, we can ensure having their own physical card system that we can use in malls and restaurants. So it can be considered best in my opinion. It had a steady growth from $3 to $9 recently which is quite impressive however right now the market is plummeting, the price of ARK is going down as well.

Ark is also working for optional privacy which may compete with Monero and also a storage function which might give a good competition to Siacoin and Storj.

It’s one the top altcoins which is modeled after the Internet of things (IoT). It has really cheap when it first came along in the market now it’s already around $1-$3 depicting its good growth. What makes it unique is, it is not based on blockchain technology, unlike other cryptos.

It uses a public ledger, Tangle. With Tangle, it becomes a similar function in a way. It’s quite secure as it constantly changes its certain address for the customers after every transaction. A seed of 81-characters long is to be generated first to create an IOTA wallet which makes it even more secure.

It has zero fees, no miners and an unlimited transaction rate which means scalability is not an issue here. Moreover, it’s recent partnership with Microsoft has caused the price to raise up and can be expected to go much higher with time. Big announcements might still be pending up their sleeves.

In future, they might get colossal as they have already partnered with big brands like Bosch. We can barely imagine how much potential they have to grow in upcoming future.

Stratis is quite ambiguous among all the other coins.

While we look at their official website and other blogs, Stratis appears to be a blockchain based platform which makes it easy for development, testing, and deployment of C# applications on the NET framework. In other words, they provide a service to the corporation for the blockchain technology to be implemented.

They are also using a cloned bitcoin’s coin with some modifications. It can be useful in various fields like fintech, research, Internet of things and so on. It will have a massive impact due to his real use causes.

Titled as the Top Altcoin and being able to trade around $700 since the last couple of days. It used to be of only a few cents, a few years ago. Now it has a whopping value depicting its colossal rise with time.

Ethereum is awesome as it introduced its own network known as the Ethereum Network by which tokens can be created by people based on their own. It’s a big relief to developers as they won’t have to create an entire blockchain from the scratch and tokens are quite easy to create and developers can easily do it. OmiseGo and BAT, are some of the popular ethereum tokens.

It’s also developing itself in the field of business in the form of Smart contracts. Bitcoin can be said to be a very simple smart contract as well. Bitcoin can only be sent and received whereas ethereum has some extra features where it can send conditions on whether the tokens can be released and so on.

It already had a great and steady growth and we can’t predict how much more it can grow. But we can have a great expectation as it has a high potential. The number of tokens in circulation and the maximum suppliers should be noted before considering the prices in the market.