Home Cryptocurrency Bitcoin Latina – Everything You Need to Know The race is now tougher than previous with the entry of another cryptocin Bitcoin Latina(BCL). Will this be another one to set benchmark in Latin America?

We can see the race of all the altcoins in the market struggling to be in the top list of the buyers and traders. With this more and more cryptocurrencies are entering in the market and increasing the competition. Now another coin with similar intentions and look alike Bitcoin, Bitcoin Latina (BCL) has stepped into the cut throat competition.

Bitcoin Latina is a cryptocurrency based on the blockchain technology developed focusing the Latin American population. It claims itself as a secure, minable and decentralized blockchain technology runs with the smart contracts built specially for the consumers, enterprises, universities, various scalable enterprises, government and others belonging to Latin America.

The Bitcoin Latina organization focuses on “By growing a Latin-based blockchain, our focus is to create jobs and prosperity while helping the people of Latin America learn about and experience the benefits of blockchain efficiencies”. Hence Latin America can get something new and the organization is all set to target the Latin Americans.

Soon Bitcoin Latina will arrive and hit the American Market. The creators of Bitcoin Latina has made a detailed study and found out that the people are utilizing the gadgets and mobile phones the most. Hence they understood the platform to get succeeded in this demography is the Mobile friendly technology.

The developers also claims that more than 90% of the youth especially the university students are smartphone users. So the foundation is going to target this population and will spread the technology to the mass adoption in the whole region.

For the promotional purpose BCL is going to hold various conferences, hackathons, various gatherings, entrepreneurial programmes at various places. The blockchain will support the documents in several languages such as Spain, Portuguese and English.

In short we can say that BitcoinLatina is more of a social endeavor rather than profit making venture. We can also presume that this project will elevate the L.As to the another level avoiding them to be left out in the blockchain tech.

BCL Goal says “The BitcoinLatina Foundation educates Latin communities about the benefits of the blockchain, and is in discussions with leading telecommunication companies, universities, credit unions and government institutions. Building relationships with regulatory bodies inside & outside of Latin America helps ensure industry growth and investor protection.”

The Bitcoin Latina Foundation has kept a portion of tokens out of 1 Billion with them which will be used in the future for the community oriented projects and development purpose.

Government is the main and integral part of any country and BCL foundation understands it very clearly. Hence they have designed the technology with the KCY and AML regulations that makes the government a look on it.

The development team of Bitcoin Latina says “The government relies on the collection of sales tax in order to run efficiently. Fiat currency requires people to be honest for the government to collect all sales tax owed. The BitcoinLatina Foundation has a solution providing direct payment of tax at the point of purchase.”

They extents that Government will never be a trouble or hurdle until they are receiving the effective taxes from the cryptocurrneices and the traders trading with it and BCL understands it very well.

The moment of “What” will be there when you will come to know that with the name of Bitcoin, Bitcoin Latina is based on the Ethereum folk. Yes, BCL works on Ethereum technology.

BitcoinLatina’s GPU is mineable and the miners have to bear the most of $5 USD for every coin mined. (we have taken $0.10/kWh at global level). The mining process will begin when the Genesis Block will be created.

There is a very impressive team that is leading the BitcoinLatina. The organization is formed by eight members viz.

This is the founding team behind the Bitcoin Latina and is now projecting to another next major cryptocurrency in Latin American Public.

The BitcoinLatina, a cryptocurrency that is solely made with the intentions to uplift the Latin Americans by giving them the platform to trade with the cryptocurrency. For this they have allocated 1,000,000,000 coins for different sectors and localities. The image given below will explain us with ease. 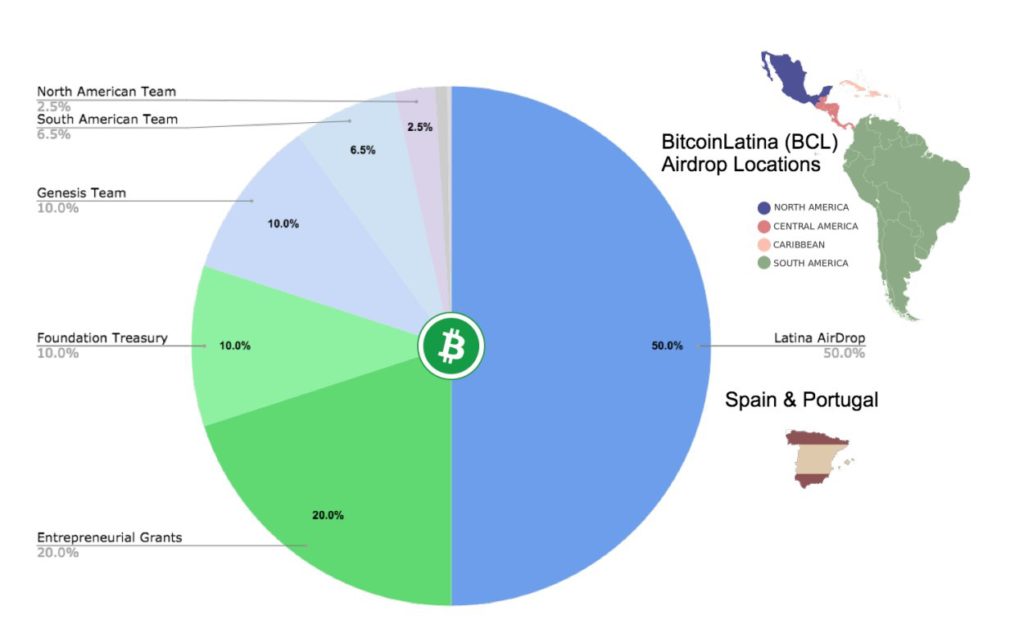 The foundation of BCL will be targeting to these many demographies and they will see that the mass population is able to use this cryptocurrency in their regular life n daily basis.

There may be confusion whether it is a next generation of Bitcoin but actually BitcoinLatina is a Ethereum based cryptocurrency that is made for the Latin Americans to ease their lives and uplift them in crypto world.