Home Crypto News What you should do if Ripple Coin still going down? 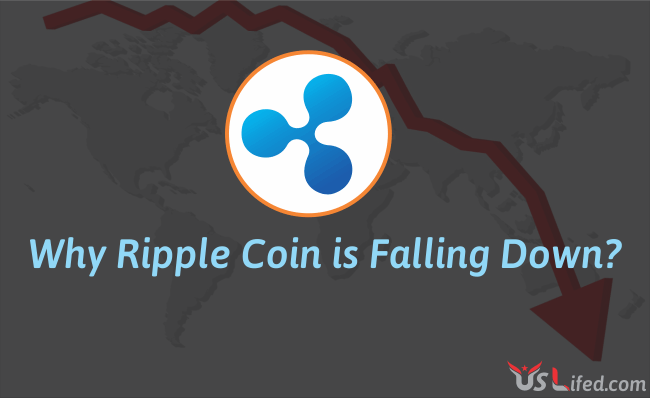 What you should do if Ripple still going down?

Well recently crypto market fell down very badly with price drop in several backbone of the crypromarket coins especially Bitcoin and Ripple thus investors who have stacked their money in these, it proven worst nightmare of their life. So it is obvious that a question arise in the mind of investors what should be done if price of the ripple is still falling down after bull ride.

We like to inform them it is not the time to cry because it takes more than 5 years for BTC to reach this high so why you are expecting XRP to reach the same in such a short period of time. Now let’s talk about why XRP Price has went down? It’s due to a statement done by the CEO of ShapeShift exchange which left investors in peculiar situation.

Why price of Ripple is going down?

Unlike its prime competitor Bitcoin, Some of the big banks like Bank of America and Santander has provided huge financial support to the Ripple as they are using money transfer system of XRP. So many experts have opposed this and criticized ripple to use it for personal benefit and boosting their economical situation in the cryptomarket. As price surged happen so many short term investors have backed out from ripple by selling it for slight gain.

As a huge blow to ripple, CEO of Shapeshift Exchange, Mr. Erik Vorhees argued that there should be no bank involving in crytptomarket because whole idea of cryptocurrency is itself to reduce medium and use of banks in money transfer.

He further argued that Ripple is trying to boost their market under the name of these big banks. Idea of ripple should be that to strengthen and fasten money transfer with more secure network and apart from this, quite a few experts have also doubted this sort of centralization with banks is totally dissimilar with the nature of cryptocurrencies.

Another reason we can consider is that clarification from Coinbase recently. Few days back rumors circulated in the cryptomarket that one of the largest exchange in cryptoworld coinbase is going to listed Ripple and will provide sufficient platform to buy and sell across the globe. However it turned out to be just a false as in a tweet from Coinbase clarified that they are not going to add additional assets to their GDAX and coinbase index.

Apart from this one of the richest person of the world, Warren Buffet tweeted that coinbase is not adding ripple so sell it out and suggest to invest in ethereum instead. This tweet went viral in the social media clouds in no time and investors who have bought ripple due to this rumor, started to sell out XRP and jumped to other altcoins instead. However it seems fake account but some users still consider as a warning and backing out.

What you should do next?

Now certainly a tough question will storm mindsets of the investors what to do now? So to let them know this business is not for you if you think that you will become millionaire in such a short period of time. So many ripple enthusiasts, investors and experts are suggesting to just sit back and enjoy Ripple price surge in upcoming time.

We have already amazed with the recently driven bull ride in the price surge by the Bitcoin (BTC) and so many well known market experts predicted unbelievable future price of BTC. However it took about 7 years for bitcoin to reach record all time high as we have witnessed so how can you expect other altcoins including ripple to suddenly rise within few months?

In a post made by one of a user in reddit, stated that Good times are coming guys! Hold tight! He posted an image of collaboration of ripple with so many known names in the technology world and saying everyone to don’t get panic, sit back and relax. Warren Buffet in his most influential quotes said that “Be fearful when others are greedy and, and be greedy when others are fearful.“ So now it is upto you what you want to do because only you are the one who have made decision to invest and we are suggesting that if you can bear then you shouldn’t sell until you recover from loss means at least you should hold it unless you can take out base price you have invested.